He is first see in the evening of their first day in the town, near the end of the first episode. He tells the abductees that he just got the job and he only works nights. When questioned how he got there, he stated that this was where he had woken up. They then asked if he didn't think that was a little weird, and he replied that "I'm used to it by now." Although he represents himself as another pawn in this mysterious affair, most of the members of the group believe him to be one of "them".

The Night Manager has stated he lives in an apartment behind the hotel.

Attempting to find answers, they threaten the manager with a shotgun. Upon beating him up to try to get answers, he manages to escape and run out of town without being affected by the microwave barrier. A couple of the abductees run after him, but are immediately stopped by The Barriers that apparently was non-existent when the manager ran out or the Night Manager was impervious to it.

The next day, the Night Manager returns to the town. All his wounds on his face are healed and he looks like new. The abductees do not ask where he has been and he does not give any answers.

In Episode 3, he is shown working during the day and states that he is the Day Manager too. He offers the members a "free, complimentary" umbrella after being asked if he had a spare gas mask, just before gas is released into the hotel, and then retreats to his office, where it would seem there is no gas.

In "Static" he confesses to The Director he is the lead agent in charge on site in The Town, because they others are dead. The Director, and Liam Ulrich inform him there is a replacement coming.

In "Seven Sacrifices" the "night manager" now reports to The Director, and is ordered to "flush" Town 27. 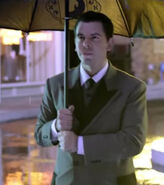