The Edge is the second episode of the first season of Persons Unknown.

After the agony of having the leg implants cut out by nurse Moira Doherty, who later admits really being just a 'recovered' mental patient, the seven find themselves still restrained to a perimeter by a pain weapon. Their lucky chance to break trough once proves futile as the only road leads them straight back. Meanwhile San Francisco newspaper investigative reporter Mark Renbe starts on the case, not supported by his bitching editor and attacked by a mystery man who steals the envelope an informant finally provided.

Come sunrise in the town, the shutters on The Downtown Hotel windows open automatically. In the lobby, Moira tries to cut the implant out of Joe's leg while the others look on. She successfully removes the device and Janet volunteers to go next. One by one, they all have their implants removed sans anesthetic.

They then go outside, tie ropes around Joe, and have him approach the edge of town. He marks where they collapsed with an ash tray and then proceeds on, marking every few steps as McNair hangs onto the rope. Meanwhile, Janet looks at the fortune cookie fortune telling her to kill her neighbor so she can go free. She then runs past Joe but hits an invisible electrical barrier and screams in agony. Joe and McNair go after her and they all three pass out.

Back at the hotel, Janet examines the burns on her face left by the barrier. She then looks up at the camera and begs for the chance to see her daughter. Joe overhears her and notes that the damage they did when they first arrived has all been repaired without any sign of who did it or how. He examines the burn on her cheek and asks if she's okay, and Janet leaves to see the others.

The prisoners gather at the Chinese restaurant and Tom serves them a meal. McNair speculates that a microwave system is used to prevent anyone from leaving. They speculate why they are there, and wonder if they're being held hostage for ransom, or on a game show. Tori says that she's there because of her father, Franklin Fairchild, former head of the CIA and current ambassador to Italy. However, she doesn't know why the others are there. Bill suggests they beat the truth out of The Night Manager and Charlie agrees. The others disagree, figuring the Night Manager doesn't know any more than they do. The others would rather explore the town and figure out what's going on. McNair separates them into search parties to check out the town for two hours and then return. Bill is unimpressed.

Renbe talks to his contact in the police, Robert Gomez, who insists that they're still treating the matter as an abandonment. When Renbe notes that Eleanor Sullivan, Janet's mother, was acting unusual, Gomez agrees to check it out. Kat comes by and asks for an update on his current story, but Renbe insists that Janet's disappearance is the story. She doesn't buy it and tells him to stick to the shock stories he's famous for.

McNair walks along the edge of town trying to measure where the microwave emitters kick in. Meanwhile, Charlie ignores McNair's suggestion to search the town and goes to the hotel front desk. Bill has the same idea and they figure they can torture the Night Manager for information when he gets back. They find a bottle of cognac and share a drink while they wait for the man to return.

Moira and Tori find a woman's clothing store, and Tori insists on finding some new clothing. She asks Moira what she does, and the woman explains she works as a psychiatrist. Tori undresses, unconcerned that the people manning the surveillance cameras can watch her, and then helps Moira pick out a dress.

Janet and Joe climb to the second-story balcony of the hotel to survey the town but don't find anything hopeful. They discuss God, and Joe reluctantly admits he believes in God but isn't waiting around for His help.

Eleanor goes upstairs to talk to Megan and asks where the missing pieces of a jigsaw puzzle are. She throws the puzzle in the garbage and tells Megan to talk to her later about respecting other people's property.

Everyone meets back at the hotel to compare notes. Bill and Charlie wonder why they don't interrogate the Night Manager. The Night Manager comes over and tells them that dinner will be served in an hour at The Shanghai Palace. Janet and Tori go to freshen up, and Janet confirms that Joe will be there. After her bath, Tori finds a glass jar and a piece of paper on her hotel desk. The jar holds a branch with a chrysalis on it. The fortune cookie note has the same message about her winning a prize. Moira knocks on the door, wearing her new dress, and Tori shows her the jar. The psychiatrist identifies it as a painted lady butterfly cocoon almost ready to hatch. Tori wonders why she knows so much about it, and asks if Moira slipped in and put the bug there. Moira denies it and Tori seems to accept her claim, and figures it's her father, toying with her. When Tori prepares to throw it away, Moira asks to keep it so she can take care of it and Tori gives it to her.

Charlie and Bill confront the Night Manager, entering his office and closing the door behind them.

In her room, Janet finds a revolver on the bookcase. A fortune cookie note says, "Kill Joe and You'll go free." She picks up the gun and makes sure that it's loaded, and then puts it down. Beneath the gun are photos of Megan. She looks up at the camera and realizes that's what her captors want her to do. She hears the Night Manager screaming and runs down to investigate.

In the street, Charlie and Bill force the beaten Night Manager to walk out of town at gunpoint. He insists that he's not one of Them, and they don't care about him. Joe, McNair, and Janet arrive and try to talk sense into them. When that doesn't work, they easily disarm Charlie and Bill. The Night Manager runs out of town and Charlie chases after him. He's caught in the microwave barrier and Janet grabs him, but they both collapse, while the Night Manager goes on unharmed.

After rescuing Janet and Charlie, everyone returns to the hotel and McNair and Joe wonder if they were wrong about the Night Manager. They both admit that torture wouldn't have worked, but figure they could have played it better. McNair realizes that Joe is an officer and figures they have to be careful.

Tori rests in her room and remembers confronting her father at a party when she was drunk, and creating a scene. Moira comes in and Tori says that she's had a hangover ever since she's arrived in the town, even though she hasn't drank anything. Moira suggests that it's depression, and then shows her the newly-emerged butterfly to cheer her up. It works, and they decide to release it… together.

In San Francisco, Renbe goes to a bar to meet with Gomez... unaware that they are under video surveillance. Robert shows a Renbe a file on Janet that confirms that her ex-husband left her when she was pregnant with Megan. As Renbe leaves the bar, Edick grabs him and demands the file. When Renbe refuses, Edick draws a gun and Renbe hands it over. The detective explains that he has a client who wants to make sure the information doesn't get published. When Renbe figures it's Eleanor, Edick knocks him out.

A storm hits the town and the prisoners gather at the Shanghai Palace. Moira explains about the chrysalis and Tori figures it's the prize from her fortune cookie fortune. Everyone else denies finding anything in their room, and Tori figures that it's all about her. Lightning strikes something outside of town, causing an explosion. They run out and McNair figures that one of the microwave emitters attracted the lightning. Charlie runs toward the edge of town on his own. When the others spot the van the restaurant workers use, the prisoners quickly come up with a plan. While Bill hotwires the van, Moira goes into the kitchen and creates a ruckus as a distraction. Bill gets the van going but everyone insist they get Moira. Tori gets her and they drive for the edge of town, picking up Charlie on the way. They drive past the microwave emitter and are unaffected.

In San Francisco, Renbe comes to see Kat at her apartment. She admits that she was worried about him, and then they kiss. He tells her that he's dropping Janet's story because he figures it's a dead end. When she notices his head injury, he claims it was an accident and they go to bed.

The prisoners drive through the surrounding woods and plan what to do next. Charlie and Janet both vow to get revenge on whoever is responsible, while Tori congratulates Moira on her bravery. They spot a light up ahead and Janet insists that they keep driving. The light grows to a blinding intensity... and they find themselves back in the town. The Night Manager comes out of the hotel to greet them. The prisoners ignore him and go inside.

The next morning, McNair bows to Mecca. Charlie reads a book. Bill brushes his teeth. Outside, Moira and Tori release the butterfly, which flies out of town... and is killed by the microwave emitters. When Tori walks away, disgusted that Moira's suggestion didn't cheer her up, Moira admits that she's a psychiatric patient, not a psychologist. She admits she has truth issues but promises that she'll get be better. Tori walks away from her.

In her room, Janet considers the photo of Megan and the fortune cookie fortunes. As she contemplates the gun, the phone rings. She picks it up and hears Megan on the other end through heavy static. Megan is on the phone at Eleanor's. Eleanor comes in and takes the phone, but can't make out that it's Eleanor on the other end through the static. The line goes dead and Janet picks up the revolver. She goes to Joe's room and when he lets her in, she backs him back in and demands answers. He promises her he'll do whatever he can so they can all escape, but Janet tells him to stop talking. She addresses the cameras, asking if killing Joe is what they want. Joe tries to talk her down and she pulls the trigger... shooting the camera. She tells the watchers that she refuses to play their games, and that she'll come after them if anyone harms her daughter. As she walks away and Joe goes after her, the damaged camera is automatically replaced by another one.

Janet pointing a gun at Joe

blinding light when leaving the town 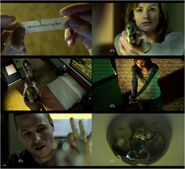 collage of Janets decision what to shoot
Community content is available under CC-BY-SA unless otherwise noted.
Advertisement